I'm not as well versed in winter beers as I am fall beers, but of the winter beers I've had Troegs Mad Elf definitely sticks out for me. On a cold night, this fairly high ABV beer will warm you up in no time. But we all know there is more to a beer than ABV, so let's break this one down. 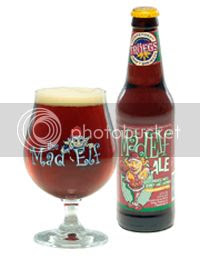 Appearance: Mad Elf is such a pretty beer. One look at the cranberry red color and you're automatically intrigued and jonesing for a taste. Being that this is a winter beer with the name Mad Elf the red color just seems to fit. Again, my library of winter beers to refer to isn't huge, but as far as appearance is concerned Mad Elf takes the cake.

Nose: The aroma of Mad Elf might very well be it's best feature. It smells delicious. Right away you're hit with smells of cherry, raisins, cranberry, and a tiny bit of clove. If a beer were solely judged on appearance and aroma Troegs would be batting 1000 with this one.

Taste: The most prominent tastes that come across for me are cherry, honey, clove, and believe it or not a tiny bit of bubblegum. The Belgian yeast definitely makes it's presence felt. I've also noticed a heavy alcohol flavor on the first or second sip, but that seems to subside a bit the further along you get.

Final Verdict: In certain ways I love this beer. As I mentioned above, Mad Elf is awesome in the looks and aroma department. However, when it comes to the oh so important taste criteria I'm not totally in love with this one. The strong alcohol flavor can become a bit much on certain nights. I also wouldn't mind a bit more hop presence to counter balance some of the sweeter fruit flavors. With all that said, the 11.0% ABV has it's place and can be quite nice in helping you forget just how cold it is outside. But to answer the question should you buy it? If you come across Mad Elf in your travels, by all means pick it up. But is this something you want to go out of your way to sample? I don't think I'd advocate that especially when I take into account the semi-hefty price tag that comes along with it. I give Troegs Mad Elf  a good but not great rating.
Posted by Unknown at 9:19 PM