It's been almost two years since my original review of Chaps Pit Beef went up. The post wasn't a bad review, per se, but it definitely wasn't as glowing as it might have been given all of the accolades Chaps has received over the years.

To sum up the original review, I stated that the sandwiches I tried up to that point weren't bad, but that I simply didn't understand why they roused up so much fanfare. And for the longest time my attitude didn't change in regards to Chaps. I never outright stopped visiting them, but it was one of those situations where visits only took place if it was absolutely convenient for me.

But then one day a light bulb switched on for me. I can't say what it was for sure that changed other than to say the meats seemed extra juicy and perfectly smoked. It was almost like visiting a new restaurant despite having been to Chaps numerous times through the years. My change in opinion was so profound that I went from visiting Chaps once or twice year to finding myself fantasizing about trips to Chaps on an almost weekly basis. One week I'd be counting down the minutes until I could sink myself into the overflowing mound of meat appropriately known as The Habbit and the following week I'd be excited to try something new such as a Reuben. Deana and I are now to the point where suggesting Chaps for dinner is met with a "didn't we just eat there".

So, what's the moral of this story? Why did I feel compelled to come full circle and make an amendment to my original review? It's as simple as this. There aren't many people out there who don't already love Chaps, but if you happen to be on the fence like I originally was let this post serve as a reminder to give them another try. They really do put out a product that is high quality and it's only a matter of finding the right menu item for your taste buds before you realize what the rest of us have already learned. Chaps Pit Beef is awesome.

Posted by Unknown at 6:55 PM No comments:

Geez! More than a month has gone by since I last posted. Getting married is time consuming business! I'm still not there yet, but I'm drawing near the finish line and you can expect regular postings in the very near future. While it's true that I've taken a short sabbatical from writing, that hasn't stopped me from taking little trips and discovering the best that Maryland Beer has to offer. 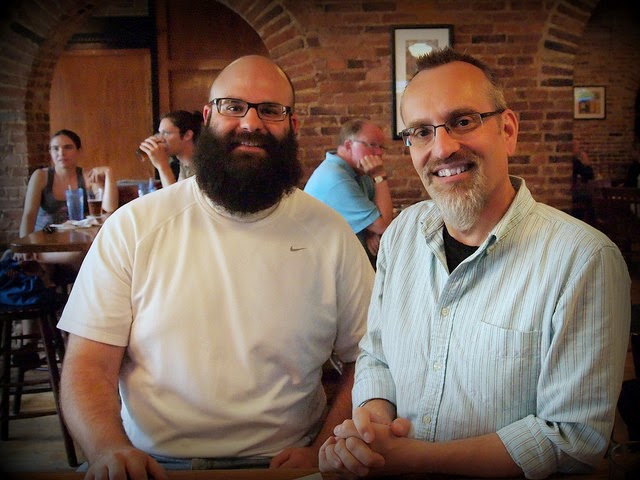 One such trip involved a meetup a few weekends ago with a blogger I've been following since way back before I really knew what proper beer even was. That blogger is pictured above on my right and he is Tom Cizauskas of Yours for Good Fermentables. But Tom isn't just any old blogger. Tom is a guy that has played a substantial role in Maryland's beer scene over the last 20+ years and it was a privilege to pick his brain for a few hours. He's an encyclopedia of local beer knowledge. Oh, and any time you come across Cask Ale locally it's in no small part to the efforts of Tom and the people he's worked with in the past to help pave the way.

While talking with Tom I learned an abundance about local beer history, but something beer related struck me on the ride home after our meeting that had nothing to do with our actual conversation. Our discussion lasted a solid two hours and spanned three or four beers. Not only was driving not an issue, but I realized I was able to give our conversation my full attention and that's something that's not always possible when the ABV of beers are running a little higher than I'd like.

As fate would have it, we met at Pratt Street Alehouse where there were multiple beers weighing in at less than 3.5% ABV on tap. The first beer was the DuClaw collaboration Back to Basix which is fantastic Ale made with Pale Malt and Amarillo hops. At 2.8% it maintains a surprisingly full body but played the part of the perfect session beer as Tom and I discussed Maryland Beer. Also on offer was the 3.2% Spring Session Ale. This beer is made with English Lager Malt, flaked oats and corn,and hopped with Mt Hood and Citra hops. It was the perfect beer to bring along to a conversation as Spring Session Ale was delicious but unobtrusive, just as any quality session beer should be.

One of my biggest hopes for Maryland beer is for low alcohol beers to become more and more prominent across our region. Beer is a social drink no matter the level of alcohol, but the coherency of conversations has an inverse relationship as the ABV creeps higher. High alcohol beers have their place, certainly, but so to do the little but delicious beers like Back to Basix. So, here's to another...and another...and another. Cheers to Session beer! And Cheers to Tom!
Posted by Unknown at 8:31 PM 3 comments: