Recently, I stumbled upon something beer bloggers do on a monthly basis known as "The Session". Each month, one blogger hosts the session and sets out a topic for other bloggers to discuss. This is my first session and it's being hosted by This is Why I'm Drunk. The topic is Beer Balance. 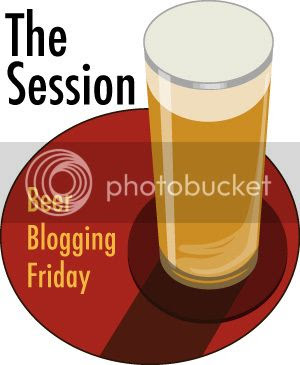 In any part of life I think balance is important. I can remember as a young kid wondering why my peers felt like it was necessary to pick one style of music and then subsequently only listen to that genre and dress/talk the way others in that community did. I didn't just like one style of music. I liked a lot. If I had to listen to only one style of music day in and day out it wouldn't take very long before it would bore me to death.

In politics I'm a registered independent. Do I lean in one direction more than another? Absolutely, I do. But I think pitting myself into a corner and labeling myself one thing or another is stupid (especially as an adult), and at the end of the day I believe there is a balance out there that can only be found when you drop the bullshit and realize that the world isn't black and white.

I also love to read a lot, but my love for reading wouldn't be half of what it is if I read the same style of books over and over on repeat. I've read fantasy books for teens, memoirs, philosophy, math, science, books on homebrewing and everything else in between. I don't want to know about just one thing. I want to know a little bit about everything. It's a big world out there and I only have one life to find out as much about the world as I can.

Most days I have a beer. Some days I don't have anything to drink. And others (not very often) the good vibes I'm getting from imbibing have me wanting sip after sip. I don't have a problem with any of these types of days. One day I might be craving the tastes of hops and one beer will do me. Another day, I might be fantasizing about my trip to Germany and that makes a few Erdinger's go down extremely smoothly. And some days I might just feel like laying on the couch watching TV and not feel the need to drink anything at all. It's not really a conscious decision of  "I'm having X amount of beers today". I just let my mood and the events of the day influence when and how much I drink.

Balance not only affects how much and how often I drink, but it also comes into play when I'm deciding what I want to drink. I like IPA's, DIPA's, wheat beers, fruit beers, ale's, lager's, craft beer, import beer, cider, mead, wine, homebrews, and yes even a beer or two from the evil empires. You name it, I like it, and I want to drink them all. The landscape of beer/alcohol is vast and I don't think I'd be doing myself justice by only focusing on just one facet. I don't think I've ever ordered 3 of the same types of beer in a row simply because I make a conscious decision to constantly seek out something new.

One of the issues I have with the craft beer community (both consumers and producers) is their over obsession with IPA and their tendency to go towards more hops, more alcohol, all the time. There is nothing wrong with preferring one beer over the other, but craft beer exists as a way of offering diversity to the formulaic mass produced beers out there. If we're all drinking/producing the same beer it's not all that "craft" anymore. At that point, you're not innovating, you're just riding the coattails of someone who set the trend 20 or 30 years ago. There's more to changing the face of a beer than just adding more hops to the brew kettle. We know what can be done with a Pale Ale. Let's see what can be done with a Lager or a Cream Ale. Let's push those boundaries. I've mentioned before in my blog that I'm a subscriber to de Vinci's thought that "simplicity is the ultimate sophistication" The craft beer boom has been going with LOUD for quite some time now and I firmly believe that it's time to start seeing a little balance and working the subtle side of beer.

When I first set down to write about Beer Balance I didn't expect that it would take me down such a philosophical road, but as you can see I believe balance is not something to be ignored. "All things in moderation" is usually something spouted out when you're trying to convince someone not to eat too many cookies. But if we apply the rule of balance to all things in the beer world, I think we'd have even more happy beer drinkers. And afterall, isn't that the goal to begin with?
Posted by Unknown at 12:00 AM