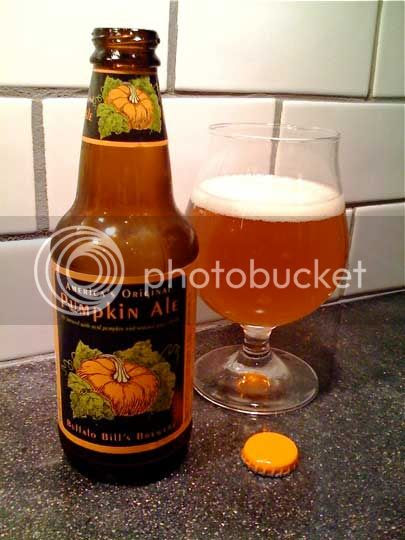 Keeping line with the autumn beer theme, today's beer tasting is Buffalo Bill's Pumpkin Ale. If I didn't mention it in the previous post, I guess now would be a good time to mention that I love seasonal fall beer styles more than another seasonal  styles by a long shot. In fact, fall beer may have been what got me into seeking out new and unique beers back in my beer geek infancy. With that said, I've had A LOT of fall beers over the years and within that style of beer Buffalo Bill's Pumpkin Ale is one of the most unique I've come across.

The coolest thing this beer has going for it is that it's brewed using real pumpkins. For that reason alone, this beer deserves props. The taste is very fruity. You get the pumpkin flavor but you'll also notice a bit of an apple presence in there.  Cinnamon and clove can be found in both the smell and flavor making it all around pleasant pumpkin ale. It drinks very different than you're average ale. I'd almost classify it as a flat cider. No beer I've had before or after this one has been quite like it.

Is this my favorite pumpkin beer? No. But if you're looking for something that sticks out in a landscape full of very similar beers this is surely one to try. Even if you don't end up going back for more year after year, this is a beer you won't soon forget. Give it a try.