The second I heard a Gordon Biersch was opening downtown I was pretty pumped up. As far as I'm concerned, if every restaurant were a brewpub I'd be a happy man. And knowing that Gordon Biersch specializes in traditional German beer...well, that definitely didn't quell my excitement either.

Speaking of German beer, these guys do it right. I ordered the fleet to get a feel for everything they offered and left very impressed. Most of their beers, like the Marzen and Schwarzbier are lagers, but my favorite of their staple beers is the hefeweizen. This doesn't surprise me as I've been a hefe fan from my early days but theirs really stands out. The banana flavor, typical in hefeweizens, really comes through and makes for an extremely refreshing beer. 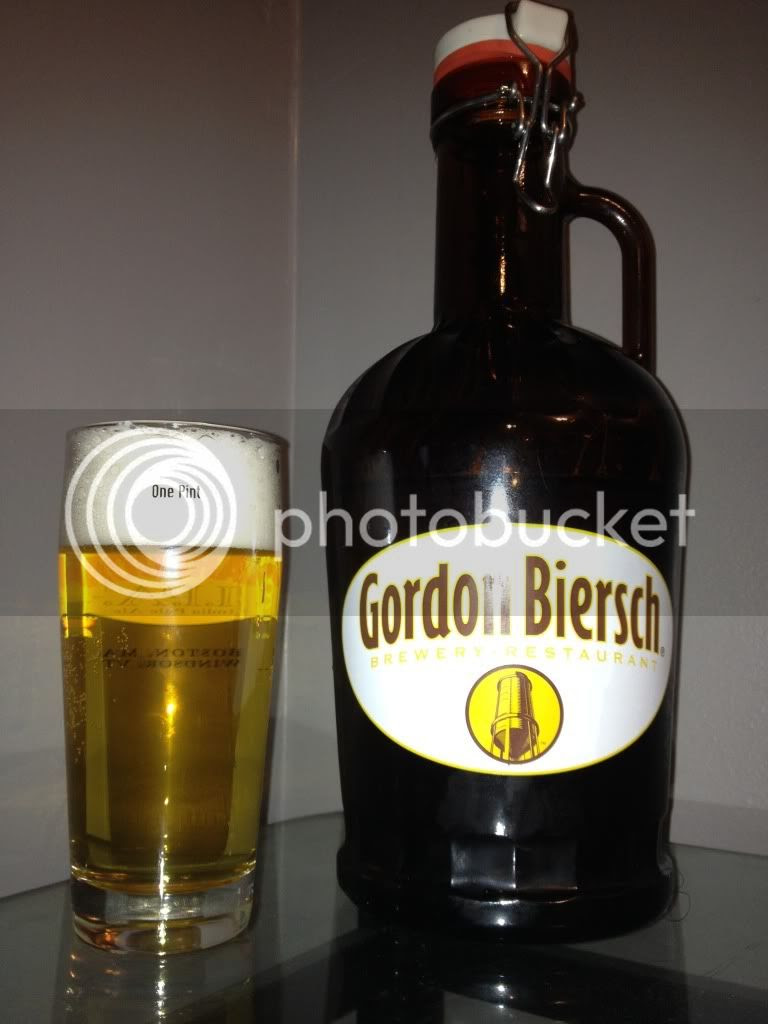 I had the lucky fortune of being invited by Gordon Biersch to try their Summerbrau (a Kolsch style beer) on a separate visit and I was very impressed with that beer as well. As their brewer Chris Cashell explained to me, Kolsch style beers are meant to be gulped down in the summer. Thankfully, the relatively low ABV and straight forward flavor profile make that possible. Summerbrau pours a gorgeous clear yellow and smells tart and lemony with a grainy malt aroma blanketing it all. Everything that comes through in the aromatics plays into the taste as well and combines for the perfect beer. In fact, it was so good I decided to bring a growler home with me. 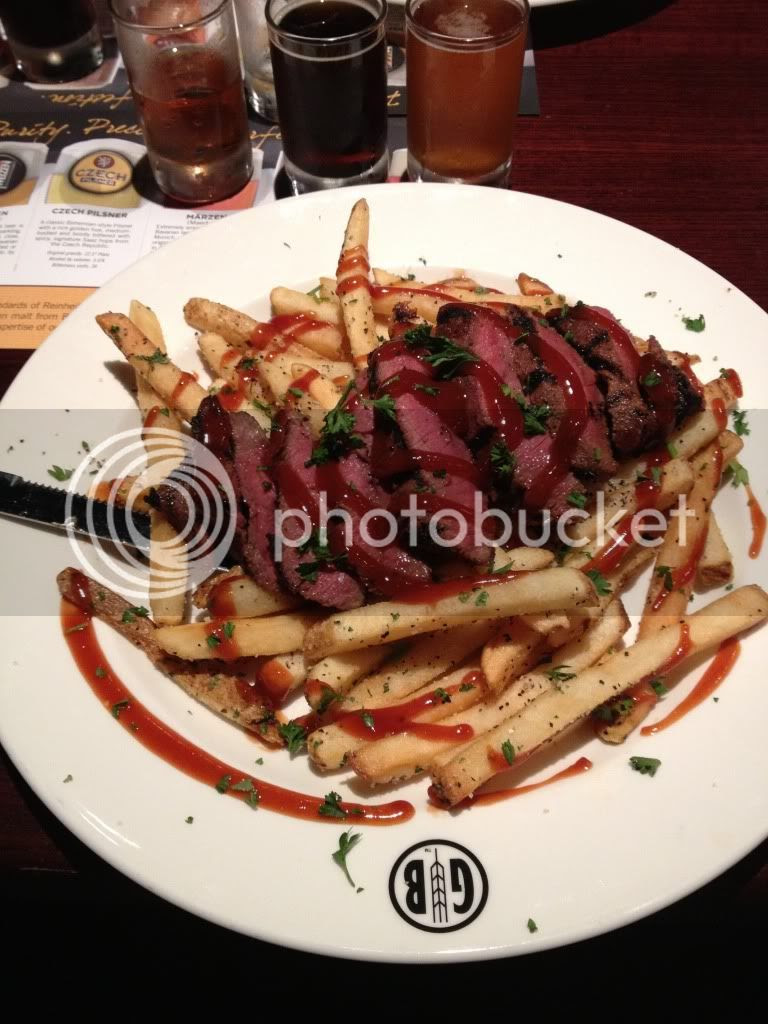 But, don't let me get carried away. Gordon Biersch is about more than just the beer. They also serve up some delicious food. What you see pictured above is a plate of perfectly cooked Steak Frites. I asked for my steak to be cooked medium rare and that's just what I got. The meat was juicy and tender and I was surprised to find myself enjoying the steak sauce they swirled about. Normally, I'm not a steak sauce kind of guy but it worked really well here. The frites were also done well, althought, I did find them to be a bit salty. However, you're going to have a delicious beer sitting right there to wash it all down so the extra salt isn't as big of a deal as it might have been at another time. 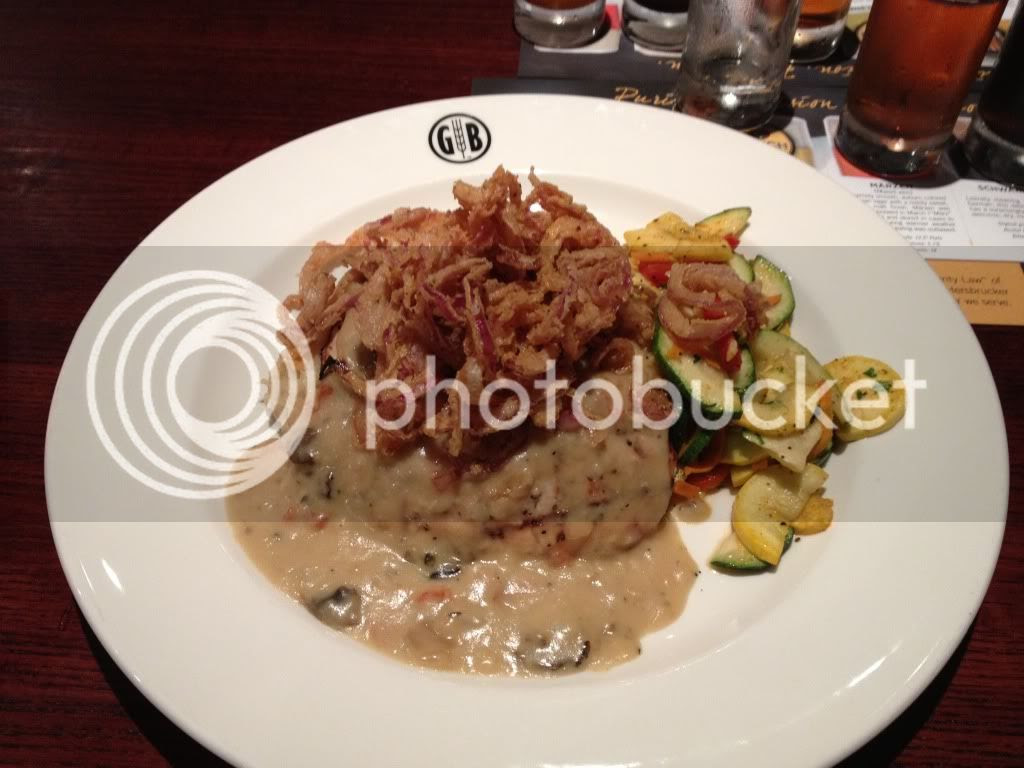 Deana was the lucky winner of the brewhouse chicken. When we were doing our "what are you gonna have" conversation prior to ordering we both had this meal in mind. Ever the gentleman, I decided that she should order the chicken and so she did. The chicken was grilled and smoothered in a gravy they make using their Marzen beer. Deana found her meal to be tender and we both really liked the gravy even though we found the main flavor to be garlic and less Marzen. It should also be noted that the squash and zucchini served on the side were actually prepared well and weren't thrown on as an afterthought like I see done far too often. 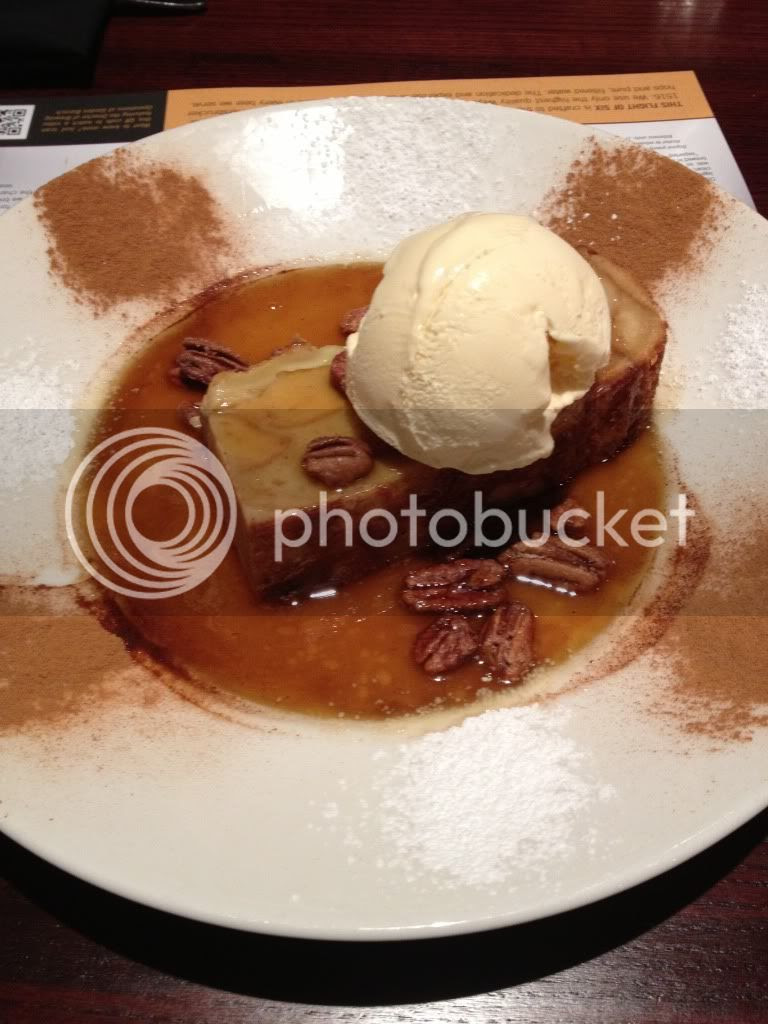 For dessert....yes, we still found room....we ordered bread pudding. Man, it was the good stuff. The bread was hot, thick, moist, and gooey. I always make fun of the chefs on Chopped who cook bread pudding in the dessert round, but if I were a judge you'd never hear me complaining. Gooey bread, pecans, caramel sauce, and melting vanilla ice cream are a few of my favorite flavors and when put all together like this you've got a desert for the gods.

If you haven't made your way to Gordon Biersch yet, be sure to put it on your to do list. The food is delicious, the beer is great, and they have some great outdoor seating for this time of year. And if the Summerbrau sounds like it's up your alley, better get up there sooner than later as it's only offered seasonally.

Price: Average
Recommendation: Like Beer? Like Food? Then you should visit.
What to Order: Steak Frites, Bread Pudding, and a hefe.