Tomorrow, on 3-1-2 Day, Goose Island will be releasing 312 Urban Pale Ale nationally. I had the privilege of tasting it a few days early. I'll give my thoughts below, but first a little snippet from their press release. 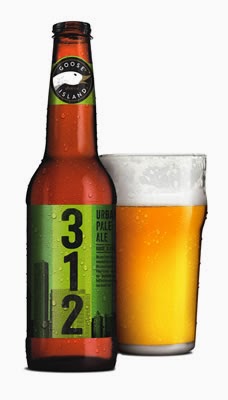 As with its exceedingly accessible and award-winning 312 Urban Wheat Ale, 312 Urban Pale Ale was brewed for those looking to enjoy another great Goose Island beer with their active lifestyle.

The new 312 Urban Pale Ale is brewed with Amarillo, Mt. Hood and Nugget hops, and has a touch of sweetness from the caramel malt which makes this beer highly sessionable. 312 Urban Pale Ale also has a bright hop aroma and a crisp bitterness that treads lightly, yet noticeably, in international bittering units.

So, what did I think? 312 Urban Pale Ale wasn't bad at all. The beer poured a wonderfully clear golden color with about a fingers worth of head. Aromatically, things were kind of subtle. Grapefruit (surprise!) and orange came through, but while there was a noticeable hop presence I was having trouble nailing down any other specifics. There was a particular note I kept picking up that reminded me of something in a jar of salsa. There was the softest hint of onion and a little bit of an acidic tomato thing going on. Weird, I know, but I double checked with my beer sniffing Q&A team and they agreed those aromas were present for them as well. For what it's worth, I'm not pointing these out as flaws, just relaying my experience. It wasn't off putting in any way. It just was. If there was anything that disappointed me aromatically, it was the fact that the malt played next to no role in the aroma profile.

My initial reaction upon taking a sip was "Boy, I'm glad this Pale Ale is just that and not a mini-IPA". Everything seemed to be in balance. There was a bit of what I call "hop spice" up front. It's that spicy tongue tingling thing that hops sometimes do. The finish, on the other hand, was really smooth. 312 Urban Ale is the type of beer you can drink all night and never suffer palate fatigue and for that I give it high marks. As for specific flavors, orange stood out most prominently but there were other hard to distinguish fruit characteristics going on. Malt played a small role on the finish with a little caramel creeping through. The salsa thing I referred to above in the aromatics showed up a bit in the taste as well with just a little mild onion flavor peeking through. I didn't necessarily like that feature of the beer, but it wasn't ruining it for me either.

Overall, I'm intrigued enough to want to buy Goose Island 312 Urban Pale Ale and give it a second try sometime down the line, especially if I see it available on draft. With summer around the bend I can see this being a beer that goes down really easy the warmer the weather becomes. If you get your hands on one in the near future, stop back and let me know if your experience was similar to mine.

*Disclaimer. I asked Goose Island if they would send a bottle of their new beer 312 Urban Pale Ale for reviewing purposes.
Posted by Unknown at 1:50 PM