A little while back my Aunt was in Baltimore for a work seminar. As far as family is concerned, I pretty much live on an island out here in Baltimore so it's always nice to see a familiar face. I wasn't aware she was in town until she was actually in town, but when I found out I knew I wanted to meet up with her for dinner. But, because I didn't know she was in town until the last minute I didn't have a chance to think about where I wanted to take her, but I knew it had to be somewhere in Fells Point. The view, restaurants, and cobblestone streets can't be matched as far as I'm concerned. While we were walking the streets trying to decide on a good place to eat I remembered a restaurant from the pre-blog era that I always really liked. The restaurant was Kali's Mezze and it turned out to be a great place to visit.

Kali's is a Mediterranean Tapas restaurant. The small dishes served one after the other were a perfect choice to satisfy the three of us and provided a great topic for conversation. It also allowed me to be slightly more adventurous about what I was ordering because I knew if I wasn't a huge fan that something else delicious was going to be on the table shortly thereafter. And really, it's just plain fun to share food and be able to compare and contrast with a few other people.

The one dish we are all excited for was the chilled beet salad. I love the earthiness and texture of beets. They were paired with mandarin oranges, a little feta cheese, and a simple vinaigrette. This dish burst with big bright flavors from all of the citrus and vinegar components, but it was cut very nicely by the creamy feta. 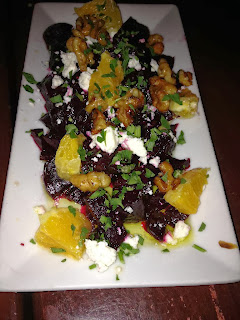 We followed up the beet salad with Shark Fritters. This is where the small plates allowed me to get a little adventurous. I would almost never order seafood for an entire dinner simply because it's so hit or miss with me. In this case, the shark was a hit that I probably wouldn't have gotten to know had it not been served tapas style. For those like me who are a bit leery of the seafood unknown, shark isn't "fishy" at all. You can tell it's fish, but the flavor is very mild and the texture is that of a thicker fish. 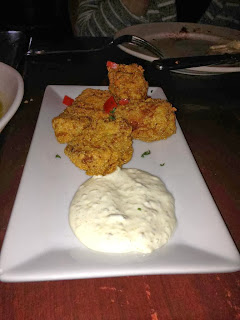 Braised beef was next in line. Some time during the past two years I've become a huge fan of meat cooked over long periods of time. I love how tender and deep the flavors become and Kali's were exactly what I expected. The meat was tender and the sauce added that extra level of savory I've come to love so much. The only issue I had was the fact that only 3 pieces were served. It worked out well for us, but if you visit with a bigger party it may not have been enough for everybody so keep that in mind when ordering. 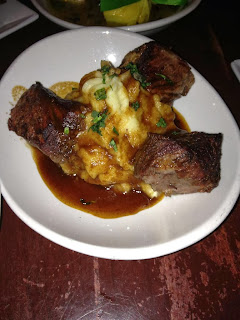 Last in line, but certainly first in my heart is the dish I always associate with Kali's -- Goat Cheese Stuffed Roasted Peppers. Man, I love those things. The peppers are stuffed with the aforementioned goat cheese and a mix of mushrooms and herbs. So tender. So good. Such a great bite. Not everyone is a fan of roasted peppers, but if you are this is probably my favorite dish in which they play the starring role. 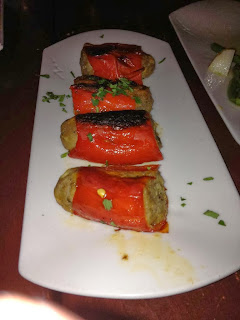 Of course, we didn't stop there. These are just a few of the highlights from our meal that night. The consensus was that the beer salad was the runaway winner of the evening, but the Roasted Peppers score high points with me due to their consistency at getting the job done year in and year out. Kali's Mezze is a great place to visit with a few friends. The food is excellent and the tapas thing is a great way to get conversation flowing. Give them a visit on your next group night out.

Price: It can be cheap or expensive depending on how many plates your order.
Recommendation: A great place for group outings.
What to Order: Beet Salad and Goat Cheese Stuffed Peppers